Hotel du Cap-Eden-Roc, part of the Oetker Collection portfolio of masterpiece hotels, is delighted to announce the upcoming arrival of a new book, Hotel du Cap-Eden-Roc: A Timeless Legend on the French Riviera by Alexandra Campbell, to be published by Flammarion 28th April, 2021.

The 312-page luxury illustrated book tells the complete story of the Grande Dame on the Riviera, from its initial establishment as a writer’s retreat by Le Figaro founder Hippolyte de Villemessant in 1870, to its magical early years as the preferred French Riviera hideaway for the likes of Ernest Hemingway, F. Scott Fitzgerald, whose Tender is the Night was set at the Hotel du Cap-Eden-Roc, as well as artists from Monet to Chagall and Picasso. All have drawn inspiration from the hotel’s enchanting setting and its lush botanical gardens landscaped with hundreds of pine trees.

Over the past century, master photographers such as Jacques-Henri Lartigue and Slim Aarons have famously captured guests splashing in the Mediterranean or in the iconic seawater swimming pool of the property carved into the rocks.

Situated in one of the most alluring sites on the Rivera, the Hotel du Cap-Eden-Roc remains the epitome of beauty, timeless elegance, and discretion, and has been a home away from home for generations of artists, authors, royalty, politicians, and Hollywood stars.

The history of the resort is also intimately linked to the history of cinema—since the inauguration of the Cannes Film Festival in 1946 it has always been a favorite haven for stars visiting the Riviera.

Each of the remarkable decades that have led up to the hotel’s 150th anniversary, celebrated in 2020, are chronicled in this extraordinary book and brought to life through hundreds of never-before-seen photographs retrieved from a broad range of international archival sources.

Philippe Perd, Hotel du Cap-Eden-Roc General Manager, commented, “For the very first time, and thanks to Alexandra Campbell, Graydon Carter, Flammarion and all who contributed, we have a full written history of our Grande Dame, who is just as youthful and lovely today as she was in 1870. For all of us at Hotel du Cap-Eden-Roc, A Timeless Legend on the French Riviera is a living history, and one we work to constantly uphold for our guests. The reputation of this legendary establishment has been forged by the competence and savoir-faire of the outstanding hoteliers, whom I like to refer to as ‘Artisans of paradise’.”

Now, as we write a new chapter in the history of Hotel du Cap-Eden-Roc, we do so in deep knowledge of our roots and of the many faces and names who have contributed to the reputation of this legendary refuge on the French Riviera. 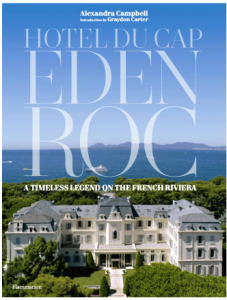 The introduction of the book is written by Graydon Carter, editor-in-chief of Vanity Fair from 1992– 2017 and co-editor on the online magazine, AirMail.

Other contributors include Marc Brincourt, chief photography editor at Paris Match from1986–2017 and author of several books on photography ; and Henry-Jean Servat, Paris Match journalist for 25 years covering the Cannes Film Festival.

Servat interviewed numerous generations of cinema stars who were guests at Hotel du Cap-Eden-Roc during the film festival.

Embark on a Culinary Journey with Accor

Dubai Crowned One of the World’s Top Cities...